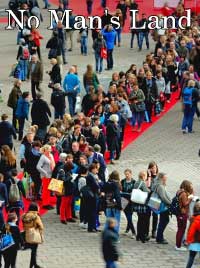 German literature is often accused (mainly from within its own ranks) of navel-gazing – we feel the fiction in this year’s no man’s land offers ample evidence to the contrary. We take a light-hearted excursion into the past with Friedrich Nietzsche in Christian Schärf’s A Winter in Nice, while Nina Jäckle’s The Long Breath takes a sensitive look at a tsunami-ravaged Japan. Vladimir Vertlib, with mordant humor, visits a Klingonian Jerusalem (The Silence of Shimon), and elsewhere describes the Way Stations of a Russian Jewish family that immigrates to Austria in the 1980s. The still more wrenching Jewish émigré experience of the Second World War is explored in “The Children Have Been Found”, an excerpt from Ursula Krechel’s novel Landgericht, which was awarded the German Book Prize. Angelika Klüssendorf’s April, shortlisted for this year’s Book Prize, tells a dark tale of a young woman who lives as an outsider in 1970s East Germany. The ultimate outsider was Ronald Schernikau, a remarkable figure whose coming-out story Small-Town Novella appeared when he was only 20, and who spent his short life torn between East and West. The two pieces set in present-day Germany are blackly humorous kammerspiele: Anja Jardine’s macabre look behind the scenes of a hotel in “Just Five Minutes”, and a spirited clash between artist and model in Artist for Rent by Feridun Zaimoglu, the grand seigneur of Turkish-German literature.

Our poetry section centers on two very different complexes of prose poems. A selection from Frederike Mayröcker’s most recent collection, études, distills the highly personal language of a great experimental poet who can look back on a nearly 50-year career. Meanwhile, Sabine Scho’s Animals in Architecture is taken from an ongoing internet project in which the poet combines text and photography. Michael Krüger, one of Germany’s great literary publishers, proves his poetic talent in a selection from Seasonal Time Change. And finally we feature two younger poets, Peggy Neidel and Marius Hulpe, with very distinct voices.

The publication of this issue is a bittersweet moment for us, as we mourn the loss, this August, of our dear friend and colleague Tom Morrison. He was a mainstay of our Berlin Translation Lab, and we are proud to have featured his fine work over the years. We remember him here with his translation of an exquisite poem by Achim Wagner, and of Ralf Rothmann’s haunting, transcendent story “Gethsemane”.

Poetry
full moon listening
lost and found
kitchen
look at all sunday can do to us
By Marius Hulpe
Translator: Jake Schneider

Poetry
while I stroll along the frozen canal …
I slip on the technosphere …
a well, streams of data …
without extensions in the panopticon …
a promise, the glass domes …
By Peggy Neidel
Translator: Bradley Schmidt

Fiction
The Children Have Been Found
By Ursula Krechel
Translator: Mandy Wight