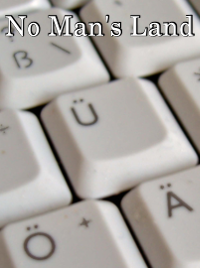 While sifting through the stacks of submissions for this year’s no man’s land, one of the editors commented on the dominance of Big Subjects: Death, War, Politics, the Sea, the Mountains. Indeed, no man’s land # 8 is rich with narrative, grand themes and landscapes, from the Alpine churchyard of Christoph Ransmayr’s “The First Years of Eternity” to the uncannily encroaching sea of Dehe and Engstler’s “Incoming Tide” and Margarita Iov’s “The Drift”. Iov’s portrayal of a brother-sister relationship overshadowed by depression is echoed in Mirko Bonné’s “Night No More”, an excerpt from his German Book Prize-shortlisted novel. Madness takes a grotesque turn in Francis Nenik’s “How Hunter Mayhem Traveled” to Uruguay, and the mosquito speaks for herself in Carmen Stephan’s “Mal Aria”. Ralf Rothmann’s “The Stars Below” takes us to the morgue, exquisitely mingling innocence with the macabre. Glimpses of Cold War Germany come from the West, with Michael Buselmeier’s spirited reflection on the student movement, and from the East, with Franz Fühmann’s subversively political Säiens Fikschen. And the darkest era of German history is reflected in Jörg Bernig’s “No Man’s Time”, a sensitive look at the aftermath of World War Two in Czechoslovakia, and Liane Dirk’s “Krystyna”, about the unlikely romance between a Holocaust survivor and the son of a Nazi filmmaker.

In the poetry section, we’re pleased to welcome award-winning young Berlin poet Steffen Popp to our pages, along with Martin Jankowski and Utz Rachowski, writers from two generations of the heady East German underground literary scene. Helwig Brunner, also new to no man’s land, is a prominent voice in Austrian poetry. And we welcome back Tom Schulz and Volker Sielaff with compelling new work.

Fiction
Krystyna: And What about Love? I asked Her
By Liane Dirks
Translator: Laura Radosh

Fiction
The First Years of Eternity: The Gravedigger of Hallstatt
By Christoph Ransmayr
Translator: Seiriol Dafydd

Fiction
The Stars Below
By Ralf Rothmann
Translator: Alexandra Roesch