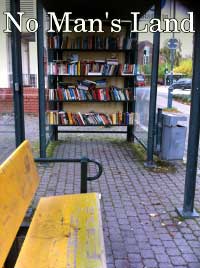 Welcome to no man’s land 2

In the no man’s land between the literatures, translators themselves are the most adventurous scouts and canniest agents, and what they smuggle back, with effort and ingenuity, has a value beyond that set by the literary marketplace.

no man’s land was launched in 2006 as the only online literary magazine to focus entirely on contemporary German literature in English translation. The first issue presented the 10th anniversary issue of the Berlin literary magazine lauter niemand in English – a mini-anthology covering the Berlin literary scene and beyond. While retaining its basis in lauter niemand‘s literary laboratory, with its second issue no man’s land has opened up for unsolicited submissions. Our faith in the instincts of translators acting as “free agents” was more than rewarded by the diverse range of submissions – and our faith in our own instincts was confirmed by the fact that a number of translators have been tackling work by authors featured in our first issue. In several cases the translations were so outstanding that we felt it was worth featuring these authors’ work again. We’ve cross-linked to the translations in Issue 1 to let you compare the different translators’ approaches.

We’re very pleased to feature short fiction by Julia Franck, who won this year’s German Book Prize, as well as an excerpt from Clemens Meyer’s searing debut novel While We Were Dreaming, the literary sensation of 2006. Volker Röhlich takes an equally devastating look at German society in an excerpt from his autobiographical novel The Stumbler. A conception of prose as enigmatic, poem-like fragment is embodied in the work of Johannes Jansen and Veronika Reichl and reflects a strong tendency among young German prose writers, while stories by Daniel Oliver Bachmann and Florian Werner feature something less often associated with German writing – humor. Donal McLaughlin’s Glaswegian version of Bachmann’s story points toward our flourishing contacts with Scottish translators and an interest in dialect in translation which we will be exploring further in 2008. (See Events)

The poetry in this issue moves beyond Berlin to include work by the widely-recognized – and under-translated – young poets Arne Rautenberg, Silke Scheuermann and Volker Sielaff. The Berlin scene is represented by two award-winning newcomers, Nadja Küchenmeister and Jan Imgrund, as well as new work from no man’ land 1 authors Anna Hoffmann and Ron Winkler.

Poetry
pond too
what it’s all about
my thinking
By Monika Rinck
Translator: Nicholas Grindell

Poetry
You should have seen that …
By Jan Imgrund
Translator: Catherine Hales