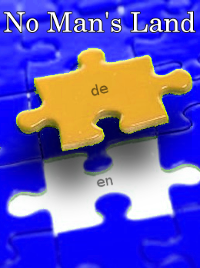 As the tenth year, and tenth issue, of no man’s land approached, we found ourselves thinking that it would make a good stopping place. Not without mixed feelings – but on the whole it feels like a cheerful farewell. We began this journal at a time when publication opportunities for translations were few and far between, and English-speaking audiences had little idea of the richness and diversity of contemporary German-language literature. Over the past ten years, we have seen a renaissance of translation culture in the Anglophone world, a surge of interest in foreign literatures even in their most challenging forms – driven almost entirely by a burgeoning community of small presses, online journals, blogs, networks and dedicated individuals operating outside the bounds of mainstream, commercial publishing. In our home town of Berlin, the Anglophone literary and translation community is thriving, engaged in a lively dialogue with German colleagues.

We are proud to have been part of these developments – and with all the new opportunities for translators, we feel we can move on in good conscience. At the same time, though no man’s land will discontinue as a journal, we plan to maintain the no man’s land community through our Berlin Translation Lab and other activities.

no man’s land # 10 is an exceptionally rich issue, with many new voices alongside returning favorites, bringing our total roster of writers to nearly 150. For the first time, we feature a literary essay, Bodo Kirchhoff’s searing, clear-eyed confrontation with the trauma of sexual abuse. The issue’s fiction features storytelling on a grand scale: Nino Haratischwili’s “The Eighth Life” launches a German-Georgian family epic, while Ulrike Edschmid’s autobiographical “The Disappearance of Phillip S.” delves into the political terrorism of the 1970s; Gunter Geltinger’s “Moor” (narrated by the moor itself) and newcomer Josef Felix Ernst’s “The Cripple and the Silken Garrotte” are tours de force of dark, surreal imagination. Our poetry includes work in experimental formats, with Anja Utler’s “9th Leaf” and Uljana Wolf’s “subsisters”, Maja Haderlap’s exploration of the borderlands of language, and a taste of novelist Clemens Setz’s first poetry collection.

For the final issue, we decided to allow our editors to submit work of their own: poetry editor Catherine Hales has contributed translations of the young poet Konstantin Ames as well as no man’s land regular Hendrik Jackson, while Isabel Fargo Cole presents an excerpt from Ulla Lenze’s The Endless City, a novel of Berlin, Istanbul and Mumbai, and Katy Derbyshire “leafing through the world” with Annika Reich’s linguistic virtuosity.

Finally, we’ve given our translators the chance to reflect on the translation process. We’re delighted that so many of them have taken us up on the offer and offered insights into their own creative process and their passion for the work they translate. It is their inspiration and dedication that has kept no man’s land going – and will continue to sustain a flourishing culture of translation.

Poetry
become flesh, an ensemble of characters
inventory
darjeeling could be a color
journey around the world, illustrated in one’s own hand
By Carolin Callies
Translator: Bradley Schmidt

Poetry
On the train I heard her say …
By Ulrike Draesner
Translator: Tom Morrison

Poetry
Bill Evans, My Man’s Gone Now
Men in the darkness
Why I am not a great lover
Exegesis
Postcards of cats with human professions
Procedure
By Clemens J. Setz
Translator: Matt Lomas

Poetry
9th Leaf: Rendering of accounts. As if from a weighty dream
By Anja Utler
Translator: Kurt Beals

Fiction
I Grew Up in a Scrapyard
By Antonia Baum
Translator: Deborah Langton

Fiction
A Bearer of Suffering. Not a Victim.
By Bodo Kirchhoff
Translator: Henry Holland

Fiction
The Life of a Top-Quality Mattress
By Tim Krohn
Translator: Alyson Coombes