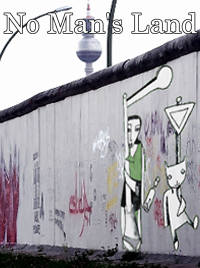 Welcome to no man’s land.

Nowhere has no man’s land blossomed as in Berlin. The fall of the Wall left a green swath through the city and uncharted territories everywhere, a breach into which rushed profit-seekers, entrepreneurs. We are speaking here of the entrepreneurs whose investment is ideas and enthusiasm – whose profit is the same, with interest. They, more than any venture capitalists, have profited from Berlin, and Berlin from them. Berlin’s real economy is the black market of inspiration.
While Berlin’s alternative music and art is already legendary in international circles, its phenomenal literary scene remains terra incognita for most English speakers. A remarkable boom in readings, slams and open mikes in recent years has made highbrow literature as cool as concert-going. And it has created a thriving alternative infrastructure that shapes sophisticated new talents and audiences alike. A prime example is the “literature lab” and magazine lauter niemand. The “lab,” an open mike for fiction and poetry, has been held every Sunday since 1996, its famously spirited discussions a testing ground for young writers who have emerged as some of the most exciting voices in German literature today. no man’s land, the English version of lauter niemand’s 10th anniversary edition, presents 29 of these voices, many never before translated.
lauter niemand does not stand for any one literary school or tendency; both the lab and the magazine reflect Berlin’s dizzying literary diversity. While it is impossible to generalize about the writers included in this issue, certain motifs recur. A good half of the contributors are themselves noted translators, while several work in two or more languages. The image of the “no man’s land,” of the boundaries and interstices between languages, cultures and minds, is reflected in manifold and subtle ways in the poetry and fiction presented here, culminating on the final page, in a symbolic act of “barter” between languages – a transaction from which everyone profits!
In this spirit, no man’s land, too, is a “literature lab” as well as a magazine, a forum for writers, readers and translators and an open frontier between German and English literatures in Berlin and beyond: www.no-mans-land.org

Dear readers,
lauter niemand, whose 10th anniversary issue we present here in English translation, is one of the most widely circulated magazines in Germany to publish exclusively fiction and poetry. With its unpretentious format, it is also one of the most accessible. The focus of this issue is on younger writers, those whom lauter niemand first published as unknowns and who have gone on to make a name for themselves over the decade of lauter niemand’s existence. Many are still regulars at the “lauter niemand literaturlabor” and form part of the growing circle of writers, musicians, artists and friends in which lauter niemand finds its echo.
These writers have more in common than a broad spectrum of prizes, publications and readers: their names stand for the unmistakable, personal voice in which their work speaks to the reader.
But what is “voice”? – What we read with all our senses, the way we have learned to interpret these sensations, what we regard as external to ourselves, what we understand as a part of our self: out of all these things we form the Gesamtkunstwerk of our personal cosmos. Its space of resonance, of (self-) definition, gives rise to a sound: to a soul, one could say.
But when we read, is it to discover the inner workings of the cosmos we create, or to despair at the chimaeras of a past we no longer inhabit, at the mirror image of our expectations? Authors take the reality they live, think and dream and translate it into the medium of writing, seeking to share its driving forces with their readers. Their presence, their unique testimony to our time, is revealed in the subjects and means they choose, in their innate tone: the voice.
How can this voice be echoed in a different language, in different contexts, without losing its soul? This is the question explored by the authors and translators of no man’s land.

Poetry
autumn for me was always
at home
By Maik Lippert
Translator: Catherine Hales

Poetry
If I had a garden
By Orsolya Kalász
Translator: Catherine Hales

Poetry
If I Had a Garden
When the winter comes, …
Language Gives Up the Ghost
By Orsolya Kalász
Translator: Donna Stonecipher

Poetry
here he is
the annihilation of fathers …
By Anna Hoffmann
Translator: Catherine Hales

Poetry
Sadness frightens my gob into silence
the trophy sheep
absolute romantic zero
the opposite of seduction
By Monika Rinck
Translator: Alistair Noon

Poetry
Yes Cassandra, Someone Is Ranting to Someone
By Knud Wollenberger
Translator: Steph Morris

Poetry
hare winter
the destruction of the fish by water
warning lamp lights up
logbook of a journey to the centre of a cow
By Ulf Stolterfoht
Translator: Andrew Duncan

Poetry
With All Your Might
Wealth and Scum
By Bert Papenfuß
Translator: Andrew Duncan