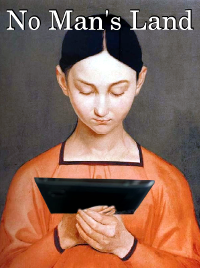 maybe this is it: a third twist, a third force
resting amongst the body’s many bulges, the lobes of lungs,
a third cataract, the blood curled tighter; blood
flows faster here, falls further there, where things are good

the stillest lakes are found far flung
and not all animals look as they look in the books
and the banks can be green, can be steep, your axe meets
something soft, you find redness-deadness when you dive.

I live in a crumbling ruin rough-hewn as if from the middle ages.
On the clotheslines hang bits of slavic cloth,
no hellenism to warm me, here the stoves are fed
with sulfuric coal, no horseshoe, I suppose,
above the threshold, applause brings a grunt
in heathen riot-tones. In compensation there’s no
Eldorado either, no disembodied hum of a thousand
lights, no quotationmarked cramming with notes
on this and that irreplaceable lotophage tincture.
Just a hairy-calved laugh at the screen
opposite or the unending chirp of the tram above the
firewall, the sleepy dozing off toward the unmanufactured.
but now come the romans and drink various
cocktails, and at my hi there give me a nod and the time of day.
though not yours, batjuschka, in your warm fur.

no sicily, a clothesline in berlin …

no sicily, a clothesline in berlin, with a plastic bag on it, as
if thrown down from the upper floor, except that the line is
carefully drawn through the handles. on the right a red light falls
on the fire wall, a young woman tastes her soup, bright interior
wide courtyards outside, above the wall the ghost of a soldier’s
helmet, tilted perspectives and steep blocks, falling facades
all around and a longish woodshed with sloping roof, freshly
dug-up ground, in the windows, like cockroaches, shadows –
people moving, bare winter trees outlined japanese style on the
screens next to the shrapnel holes and the rattling here and
there the order scattered over the night is full of resonance
we watch each other, hardly ever let each other out of reach.

lightly ends the day, a broad
Bridge pylon, pitted, the abdomen of a decayed insect

swept aside by a gust of wind.
Outside, the deck of the ramshackle boat, I think,

so under the black flag, the constant
Gliding off, proud dark, and rows of waves lapping

at the quiet Mainz bank, but blindly
Now gulls nearing and veering off, their flash

above the layers and sediments.

All the eternal chitchat …

All the eternal chitchat (skutschnie pesni zemli), night a trembling light in the room,
the casual friends, so indulgent, so much (yakking, fussing) tossing of balls balls, the mouths.
buff. your (invisible) part seems larger now than mine, which I put aside in a thought
by the window crack, in mutual command enthroning slumbering pride.

For all that we quietly left it as it was, the room, with freedom of eyes, fetters of death,
a process, hesitant, trickling through ignorance, of widening winds. until we
start talking of dayafterday, put on clothes and again practice a few gestures and moves.
and look sideways where it returns, unconscious as the warm swarming of bees from the hive.

i hung over the sea on a blue thorn,
the sky that is, waiting for a moment
of beauty, of sense, the absolute poem
would please you. my shadows gobbled
fishes. elements raged, i saw grey rows
of teeth made out hotels. the rage of the waves
failed on the shore. the land pulled its collar
tighter. saw sou’westers, tons of freshly-oiled
flesh wobbling on wavecrests, from far off
the horizon, where ships were stuck on, across
the sea made out this: the last fish would have slices
of lemon in its mouth. the dunes would eat
the last humans the last poem would be
on the menu the last girls, incorruptible and legitimised
by beauty, would lie in ruins for ever, teeth
chattering in the wind and shine through centuries.
the thorn would grow larger the last poem would
have the form of waves then everything would start
from the beginning again and in the next world
this here would be a bathing resort again

stones, hunchbacked, schlepping themselves
from grave to grave

the white freezing of birches
the formula is tender, almost light,

the dead lilies of january
snow witches, do not wilt

Old maritime maps on the walls and spiders’ webs so fine.
You touch the house all over.
The holidays, laugh the children and demand ice cream
until our ears hurt, now it doesn’t matter
as much as on days in the city.
In the evening we listen. The wind is in charge here.

View Across the City

There are the clouds, acid-green
and cursed. An aircraft
with unidentifiable destination, a vapour trail
and horror, if you think about it.

Then
the points, towers and turrets
the languid flight path of a falcon.
Pigeons and blind people are more
than the city fathers care for.

A little further on concrete
steel and glass attracting smears. The whole
realm of unconnected ideas
as though it were a rage against reality.

Sometimes
everything is smaller than ants, teeming.
The dust of our wishes is hidden
under the bed and we draw back from
any effort to bring it out.

carried over from then: an overdrawn winter
account and unsolved equations

not yet fully grown: the year breaking out
flexes itself with weak thunderstorms

a spaciousness outside a disturbance
of the air: grass pollen wetness and a gulping

beneath the loosened scarves: tinged with
unsaturated remains of swath and aftermath

climate and change in contrast
the tertian fever of short summers

Stumble stutter stammer slur
twist the tongue in knots and
become incapable of speaking
no
today is another day
a day to snap my fingers
when everything so easily
slips smoothly from my tongue
I felt it first thing this morning
when my tongue fresh and free
with a healthy red color
and no trace of white coating
awoke amid my tired teeth
and immediately slithered
through all the articulation points
effortlessly reaching just to test
even the hard interdental ones
(usually I can do them only late in the day
and sometimes not at all)
oh what pleasure to articulate today
even the difficult diphthongs and triphthongs
Words with heaps of consonants like
Shortribs Sheepshank Muttoncalf
or maybe Rumpelstiltskin
and then the lovely words with l
no need to fear a lapsus linguae
not today, certainly not today
I have my tongue I tell you
how good to have it today
especially today
since yesterday the Gileadites
seized the fords over Jordan
and cut off our escape
they won’t catch me today
even if their phonetically-trained guards
make me say Shibboleth Shibboleth
and again Shibboleth
whether as a single word or
in a harmless context
I know they won’t catch me that way
today I’ve got my tongue
I shall certainly
not misspeak
I shall certainly
pass over Jordan
I shall be saved
In fact I am
already saved

The Marketplace in Machu Picchu

For Friedhelm Kemp
the writer

only the word ruled over the Forum

Americanum
From that outcropping the Inca Cicero probably uttered

quid ergo vos?
Hasn’t any of you ever had an itchy hand?
The right hand I mean that leads the llama and that

you hold out to a friend
the hand that is made for writing
about the gods over the Forum Romanum and about
the good and even the evil gods
Why haven’t you written anything down?
Why have you kept to yourselves everything that

moved your hearts?
All Inca thoughts locked up in the miserly breast
graves made out of your mouths

silent lips
to simple everyday words on the marketplace

of Machu Picchu
and the hushed balm of the nightwords

Were you on the whole satisfied with your world?
Did the gods benevolently accept your sacrifices?
Even the white gods who came up from the sea

on your unprotected flanks?
You had just founded the empire the Inca empire

writing instrument
among thousands and thousands of Inca hands

indefinitely
Writers of the Incas where are you?

Or was it all quite different?
Were you more literate than is good for writing?
Were you already tired of writing before you began to write?
Did you write yourselves on the wind?
On the indifferent Pacific wind that sweeps

over the Andes to die in the interior?
Ventis verba ut vela dedistis